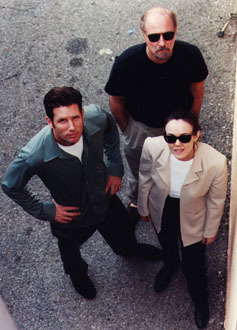 The Stone Coyotes are a family trio. But, as one writer put it, don't expect lace curtains, casseroles or Partridge Family kitsch. With songwriter Barbara Keith on electric guitar and vocals, husband Doug Tibbles on drums, and stepson John Tibbles on bass, this band rocks - and they mean it."
Their sound? Spare, aggressive and primitive - grounded in rock country, punk, folk and blues, is centered on Barbara Keith's timeless songs and the band's fierce dedication to the groove.
Barbara began her career at the Cafe Wha? in Greenwich Village, and was soon recording for MGM/Verve, A&M and Warner Brothers. Her songs have been covered by Barbara Streisand, Lowell George, Tanya Tucker, Delaney and Bonnie, Hank Snow, Olivia Newton-John and others.
Her husband Doug Tibbles had been a TV writer for such shows as The Munsters. Bewitched, My Three Sons, Family Affair, Andy Griffith, Love American Style and others.

Unhappy with show biz in general, Barbara gave back her large major label advance and they went underground. Doug took up drums and his son John took up bass at age eleven. Reclusive by choice, the band moved from L.A. to Western Massachusetts to write and woodshed. "In order to develop our true musical style, we had to go 'far from the madding crowd' in the tradition of one of our heroes, Emily Dickinson," Barbara explains. They began playing the occasional show while recording in their cellar. In '95 they had a song on the soundtrack of Disney's "Heavyweights" and the following year one in "D3: The Mighty Ducks."
Last August, novelist Elmore Leonard came to their L.A. show at the Troubadour. He was searching for a band ro use as a model for his sequel to GET SHORTY, a book about the music business called BE COOL. He found what he was looking for in the Stone Coyotes. As he put it in a recent interview, "It's something I can understand, and that Chili Palmer can understand." A partnership was formed, and lyrics from their newly recorded album, CHURCH OF THE FALLING RAIN, will be included in his upcoming novel. A recent "Evening of Words and Music" with Elmore reading and the Stone Coyotes playing at the Viper Room in L.A. was a great success. More shows are planned for the future.
In January of this year, the band was signed to Bug Music, publishing administrators who will promote the band and the songs themselves worldwide. Barbara says, "Any company that has Johnny Cash, Muddy Waters, and Beavis and Butthead is our kind of company."
The band continues to gain attention with their live shows in New England, New York City, L.A. and Nashville. Trends may come and go, but The Stone Coyotes are the real thing. They rock - and they mean it.

"Poised to be the coolest husband-wife-and-son rock and roll trio ever... Those wary of a hype short on substance should rest assured this family has the chops to back it up...
THE L.A. WEEKLY

"This disc is comparable to anything released on national level during the year. It rejuvenated my interest in rock music.

"Their sound has a rootsy flavor overall, but the influence of bands like the Rolling Stones and X are undeniable....Multi-million selling author Elmore Leonard is going to be releasing a book about the music industry that uses lyrics from four Stone Coyotes songs.

"...Simply stunning rock and roll - stripped to the bones and full of passion...ringing electric guitar and the band's patented bass/drum sonic attack will have you dancing around the room."

""The boom-crack, boom-crack of kick and snare drive a clean, steady groove. Suddenly, space opens up, creating palpable tension. Through it all, Keith's voice rings out like a warning bell, dancing on a single note forever, skimming across the music like a skipping stone. Words twirl upon a tightrope: you don't want her to drop that note."