Gierson
on the
Mound 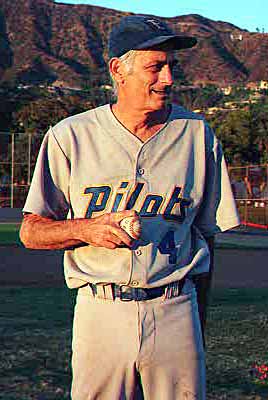 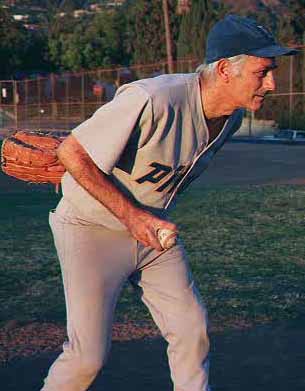 (hardball) for the Los Alamitos Falcons, a team in the Orange County (California) NABA (National Amateur Baseball Association). Ed Weber was the manager. We trailed by 12 runs, and during the last two innings, I was our pitcher.
I had only hoped that I could get the ball over the plate; and I fully expected the batters to hit the ball hard and far. I held out no hope of pitching effectively. But for many years, I had dreamed of having the physical capability of pitching the ball over the plate for strikes. At the beginning of my first inning of ever pitching in a game, the opposing team was indeed hitting the ball far and hard. Luckily most of these balls were caught, or were foul.
During this inning, I noticed that I had much better control of the split finger slow ball, than I did of the "fast" ball. (The "fast" ball was not at all fast, and it came straight over the plate -- sometimes over the plate, but many times out of the strike zone). I also noticed that the split finger pitch was not getting hit well.

Surprisingly -- to me and to my teammates -- only one run scored, and one batter struck out. So ended my first inning of ever pitching a baseball in a game. The next inning was better. No runs scored. And there was another strikeout. I remember being happy to discover that it was difficult for batters to hit the split finger slow ball.
About one year later, I pitched one additional inning for the Falcons. My recollection is that there were no runs scored. I did not use any pitch excepting the split finger slow ball.
In about September of 1996, the Falcons team was dissolved.
In March of 1997, I joined the Brooklyn Dodgers amateur baseball team in Burbank California. On 3/8/97. I pitched two innings of a practice game for the Brooklyns (we don't call ourselves Dodgers very often.). 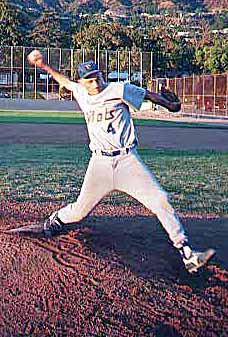 The first of these innings was three up, three down. Two balls were hit back to me, for easy ground outs. One ball was hit hard, and far, but the center fielder chased it down for an excellent catch. I threw only the split finger 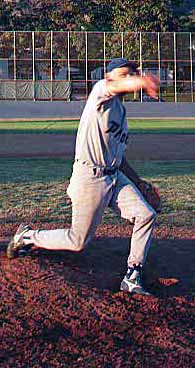 pitch. And I was able to throw most of the pitches for strikes. The next inning, after one out, one runner reached first base. He got there on a hard hit ball to third base, which in amateur baseball would be called a hit, because it was hit so hard. But in professional baseball it would be called an error, because the ball was hit directly to the the third baseman, who knocked the ball down -- although he did not field it cleanly. I believe a double play ended the inning, although I cannot remember clearly how the inning ended. I do know that no runs scored. And I know the runner did not advance beyond first base.
On 3/16/97, with my team losing 12 to 3, during our first league game, I came in for relief in the last inning, with the bases loaded. Three batters faced me, and they were retired in order. No runs scored on me. I threw only the split finger slow ball. One batter struck out. One batter popped-up for an infield-fly-rule out. One batter grounded out to the second baseman. 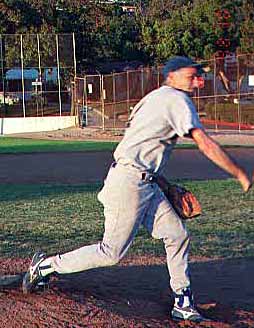 I am amazed, and I am incredibly happy, that I am able to get batters out, strike out some of 'em (a high percentage of strikeouts seems to be accruing), and to have very few runs score against me. No runs have scored this season -- but I have pitched only three innings this year; and only 6 innings in my lifetime.WOW!

APPRECIATION: Whatever success I have had (and might have in the future... I have become an optimist about my pitching abilities) could not have happened without Mike Levine. Mike and I have been practicing ground balls and fly balls for the past 6 or 7 years. We practice once or twice a week, and we only miss an occasional week. He has encouraged me to practice pitching, and has patiently chased after the many pitches that were too wild to catch. I believe that, without Mike's encouragement, I would not have been able to be a pitcher.